Say if you have a management server or a script repository server, sometimes users save/test/run their script from different path, it is different to maintain the script version, and it is hard to determine which script can be removed or kept on the server.

here is a solution,  you can save all scripts in a central directory, and keep script from running in other path with Applocker. let's say my scripts are saved in c:\work:
1. Open "local security policy" by secpol.msc

4. Select "Allow", and enter the user name which 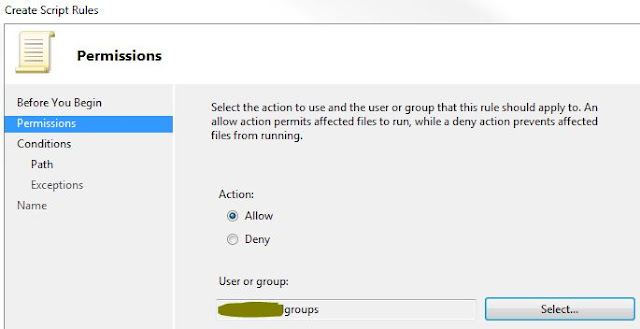 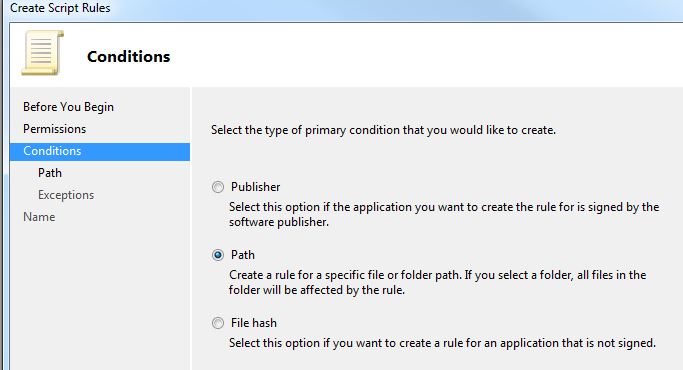 8. Enter the Name of the Rule

9. Click "Yes" to create default rule if it is the first time you use Applocker

After the rule created, if you run powershell script from other path, for instance "c:\temp", you will get error

Only running powershell script under c:\work is allowed.

Actually no only powershell script, but also other script like(.com,.bat...) can only be run from c:\work,

you can create other rules to meet your requirement.

Usually named instance can uses dynamic port, if firewall setup on the server, you can use SQL Server Configuration Manager to assign a specific port to SQL Server instance. However, there is no UI to reconfigure the DAC port, you need to use regedit.exe to configure a specific port number.

please note, don't need to use parameter -A in sqlcmd command line.

Use delegated session configuration in Powershell 3.0

Powershell 3.0 has many new feature, and they are useful in some circumstance.

Normally if we want to use remote session to access resource , we can use cmdlets
1. Enter-PSSesssion
2. Invoke-Command.

However we need to provide User B's credential and password when create remote session. There is potential risk, sometimes we don't want to give the password to operators, in that case, we can use delegated session configuration.

Here is the step
1. Register a new session configuration with "-RunAsCredential UserB" on Server B

Here we create a session configuration named "DomainAdmin", and the session will be run as user "xxx\administrator" credential 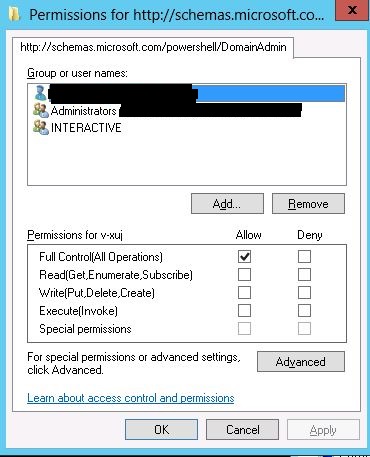 so when we run whoami, it shows the current user is administrator(User B).

delegated session configuration is easy to use, and very useful especially on system maintenance work.

If you want to make you backup faster, you can try BUFFERCOUNT parameter with compression backup.


BUFFERCOUNT = { buffercount | @buffercount_variable }
Specifies the total number of I/O buffers to be used for the backup operation. You can specify any positive integer; however, large numbers of buffers might cause "out of memory" errors because of inadequate virtual address space in the Sqlservr.exe process.
The total space used by the buffers is determined by: buffercount * maxtransfersize.

Below is my testing result, all backups use compression parameter. the data file is 195GB with 11GB used. by using compression, the backup file is 8.4GB

it completed with 88MB/sec throughput, avg cpu% is 45

here is the result: 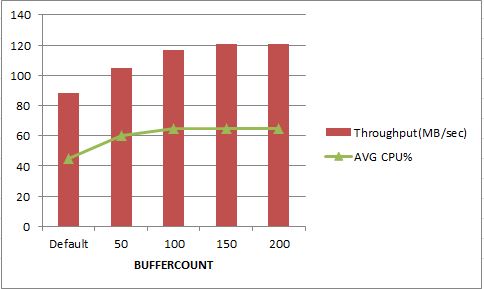 based on the diagram upper, when BUFFERCOUNT = 100, Throughput reach the ceiling, comparing with the first command without BUFFERCOUNT parameter(default), we made the backup process 30% faster.

you can also use multiple backup files to reach the same goal. 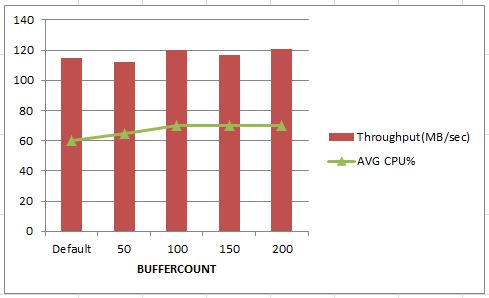 based on the diagram upper, there is only 5% performance difference between using BUFFERCOUNT and no BUFFERCOUNT.

Although BUFFERCOUNT makes higher CPU %, the backup always runs during off business, so if you can afford the higher CPU% penalty, it is worth to try BUFFERCOUNT. Please test the appropriate BUFFERCOUNT value based on your environment.